X-rays: the extended eye of humanity

X-rays: the extended eye of humanity

What can X-rays do? Compared with this major scientific instrument, people are more familiar with the X-ray examinations done in the hospital. Interestingly, the discovery of "X-rays" more than 100 years ago was purely accidental, and its discovery brought a revolution to medical and security inspections.

On November 8, 1895, the famous German physicist Wilhelm Konrad Roentgen planned to study the penetrating ability of cathode rays. Roentgen first repeated the previous experiment. However, in order to exclude the interaction between the cathode ray and the outside world, Roentgen tightly sealed the cathode ray tube with black cardboard and tin foil, so that the visible light in the tube would not leak out of the tube.

The laboratory is a dark room with complete shading. In the experiment connected to the high-voltage power supply, Roentgen accidentally found that a fluorescent screen one meter away emitted a faint flash. Once the power was cut off, the fluorescence disappeared immediately. He chose a number of materials for the obstacles, including his own fingers. Roentgen held a piece of lead between his index finger and thumb and placed it where the ray passed. He was surprised to see an image of his finger on the lead. The bone of the finger created a darker shadow than the surrounding soft tissue.

After trial and error, Roentgen was convinced that this was a new type of ray that had not yet been recognized, and its nature was unclear for a while, so it was named "X-ray". Soon, Mrs. Roentgen came to the laboratory, and her ring-wearing finger was X-rayed, leaving a historic photo. 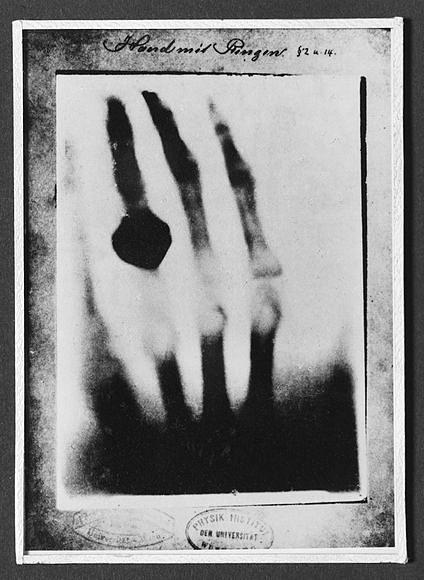 Because of this epoch-making discovery, Roentgen was awarded the first Nobel Prize in Physics in 1901. In honor of Roentgen, X-rays are named Roentgen rays.

X-rays are actually short-wavelength electromagnetic waves, with a wavelength of about 0.01--10 nanometers. Because of its short wavelength and high energy, it can easily pass through cardboard, muscle and other tissues, but can be blocked by dense objects such as metal and bone. Therefore, X-rays can be used for fluoroscopic imaging in medicine, which is used to detect diseases. conventional means. When X-rays with unique penetrability are used to project the human body, images of the anatomical structures of the tissues and organs in the body can be obtained, thereby conveniently providing important information needed for clinical diagnosis of diseases. In addition, when X-rays are irradiated to the biological body, the biological cells can be inhibited, destroyed or even necrotic, resulting in different degrees of physiological, pathological and biochemical changes in the body.

X-rays are the extended eyes of human beings, leading human beings to see the microscopic world and internal structures that are invisible to the naked eye. In addition to applications in the medical field, X-rays are also widely used in the analysis of crystal structures and in industry.